Come and discover the boatlifts on the Canal du Centre.  These unique, UNESCO-protected engineering works are a living reminder of the Centre Region’s industrial heritage.

Take a boat-trip out on the historic Canal du Centre

There are two trips on the Canal du Centre organised every day, running from the Strépy-Thieu funicular boatlift to boatlifts 2 and 3 at Strépy-Bracquegnies.  The trips go through the earliest automatic lock in Wallonia and cross boatlift n°4 in Thieu.

The canal made a huge impact on the villages it went through, often cutting them completely in two.  Come and discover just how influential the historic Canal du Centre was, on board a Voies d'Eau du Hainaut's barge!

So why take a trip out on the canal here?  Because you’ll get the chance to climb aboard and experience crossing a boatlift, the automatic lift in Thieu and lift bridges from the deck of a barge.

These works are world-renowned as exceptional engineering structures, and were classed as a world heritage site by UNESCO in 1998.

As the primarily coal industry developed in the region, the problem of transporting all of the merchandise reared its head.  Between the Charleroi-Brussels and the Mons-Condé canals, the height differences were too great to be crossed effectively by a traditional system of locks.

These four boatlifts are concentrated in a short section of the historic Canal du Centre, and are some of the finest industrial monuments still standing.  With the canal itself and its structures, these offer a remarkably well preserved and complete glimpse into the industrial landscape at the end of the 19th century.

Built between 1888 and 1917, these enabled the Canal du Centre to surmount a height difference of 66m using a single source of energy: water!

Of the eight boatlifts built by the beginning of the 20th century, the four on the Canal du Centre are the only lifts in the world which are still operated using their original mechanisms.

A walk along the Canal du Centre

In 2002, the funicular boatlift at Strépy-Thieu was opened and displaced all of the merchant traffic to the new canal, which was adapted to 1350 tonne barges.  Today, the boatlifts are only used for recreational vessels… making them even better for tourists and barge-lovers!

The regional industry has also left the region with a network of towpaths, which are now used as tranquil foot- and cycle-paths.  They are the perfect way to enjoy long walks or bike rides out in the country.

The machine room at lift n°3

Aside from the lifts themselves, shining examples of industrial design, the machine room at lift n°3 – which powers both lifts 2 and 3 – is also worth a visit.  These fortress-like buildings house ingenious mechanisms which power the lifts using no other energy than the water around them.  You can find out all about this environmentally friendly system with the audio-guides on site!

At the entrance to the tourist centre, there’s a bike rental point for cyclists who want to take to the tow-paths themselves and discover all of the different structures at their own pace.

And above the canal there are also ten bridges to discover, including a few drawbridges and a swing bridge.

And lastly, to fully see how the canal was connected to the industrial centres in the region, you’ll need to drop by and visit the Cantine des Italiens.  The coal and heavy-industrial sites in Belgium required a vast amount of labour, bringing in workers from around the world.  Hence the Cantine des Italiens: a place of real significance for the history of Italian immigration in Belgium.

Built in 1946 by the Boël factories for their workers, these buildings have since been transformed into a café/restaurant and a museum.  In May 2001, the ASBL Voies d'Eau du Hainaut took over management of the site, developing a fully equipped Immigration Information Centre.

Whether you’re on your own, with the family, out with friends or part of a tour group, the ASBL Voies d’Eau du Hainaut offers all sorts of different ways to get out and enjoy the sloping lock of Ronquières. 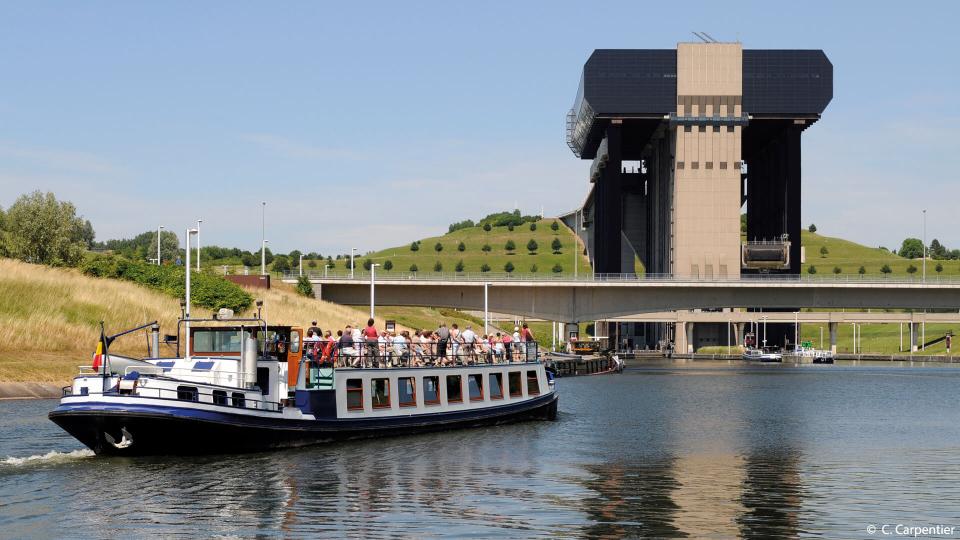 The boat lift of Strépy-Thieu

The Sloping Lock of Ronquières